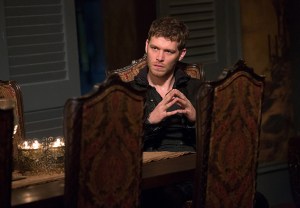 Klaus, Elijah and their fellow supes are picking up the pieces of The Originals‘ hellish first season in a new gallery of first-look photos from the Season 2 premiere.

One thing’s for sure: Life in New Orleans is not a pretty picture in the drama’s sophomore outing — unless, of course, we’re talking about the painting Klaus is working on in one of the shots. That is literally a pretty picture.

Meanwhile, Hayley appears to be sulking after the events of last season’s finale — becoming a hybrid and giving up your baby will really mess you up — while Klaus remains just as scheme-y as ever. (Seriously, it looks like he’s doing a Mr. Burns impression in one of those photos.)

Elsewhere, Marcel is going full-on Fight Club with a few of the Big Easy’s less favorable characters, before taking a meeting with none other than his sire! Not going to lie, it’s great to see those boys getting along (to any extent) after so much turmoil.

And then there are two of this season’s Big Bads — Esther and an unidentified Mikaelson brother — who are spotted on a more-than-leisurely stroll through the French Quarter.

Browse our gallery of Season 2 premiere photos below, then drop a comment: How are you hoping the drama will play out on The Originals this fall?