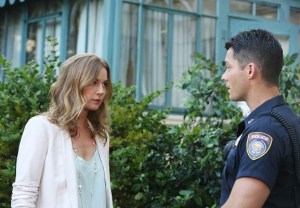 As the old saying goes, there’s nothing like a man in uniform.

When Revenge unspools Season 4 (premiering Sept. 28 at 10/9c), Jack will go from being arrested to the one holding the ‘cuffs — as he dons policeman duds!

The following photos from the upcoming season’s second episode feature the bar owner hard at work on the mean(ish?) streets of the Hamptons with his new friend (and presumed partner) Ben, played by Brian Hallisay (Privileged, Mistresses).

Whatever the boys in blue have come across does not seem to please Emily.

Click through the gallery, then hit the comments with your thoughts on Jack’s new profession.