'New Girl' executive producers Dave Finkel and Brett Baer preview the gang trying to hook-up at a wedding in the Season 4 premiere.
× 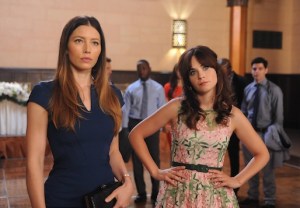 It’s been a cruel, cruel summer for the lofties of Fox’s New Girl, who’ve endured wedding after wedding with little more than a refrigerator door full of save-the-dates to show for it.

But as Season 4 opens (Tuesday at 9/8c), the group’s long, nuptial nightmare is drawing to a much-desired close.

“We pick them up [as they’re] about to attend the very last wedding of the season,” executive producer Brett Baer tells TVLine. And all of those champagne toasts and garter tosses have proven fertile romantic ground for some (Schmidt, Coach), not so much for others (Jess, Winston).

With cold weather only months away, “Schmidt charges everyone,” EP Dave Finkel says. “Everybody has to hook up” before winter (and the baggy clothes that come with it) sweep in to make things tougher.

But do the pals find wedded, er, bedded bliss? Read on as the EPs tease the tuxedo-wearing, chicken-dancing, rice-throwing season opener.

STIFF COMPETITION | As previously reported, former 7th Heaven daughter Jessica Biel guest-stars in the episode as the woman battling Jess for the most eligible guy in the room (played by Veep‘s Reid Scott). Biel’s Kat, a sophisticated scientist, has “got pretty good game,” Baer says. “She’s a genius… and she looks a lot like Jessica Biel.” (To get a sense of the match-up, watch a sneak peek.)

NEW WORLD ORDER | Nick, now free of the whole you-make-me-wanna-be-a-better-man-thing after his break-up with Jess, has reverted to his slouchy, lackluster, unambitious ways. He’s back to trying to get “the low-hanging fruit,” Finkel says. “He’s comfortable where he is. He’s happy.” And as such, he’s cool with Jess’ pursuit of other guys. In fact, the EPs preview, he offers some wisdom that helps Jess shake off her hook-up-related nerves during the reception. OFFICER DOWN! | Might the wedding prove fortuitous for the perennially lovelorn Winston, too? Maybe, the EPs tease, if he can just ignore the fact that his entire body aches from police-academy training. But even though he’s beat up, there’s no chance Ferguson’s dad will give up his goal. “He’s going to become a police officer and garner the respect of his roommates,” Finkel says.

HISTORY REPEATING | When Nick’s not boosting his ex’s spirits, he’s talking Schmidt out of a really, really bad idea. “We find out that Cece is now single again, which is what gets Schmidt spinning a little bit,” Baer says. So will this season revisit the pair’s Season 1 relationship? Baer plays it coy. “She’s always going to be his Achilles’ heel,” he says, “but he’s going to try to keep doing other stuff.”