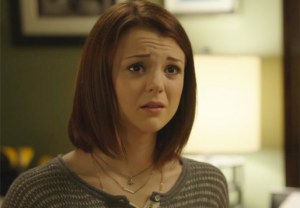 Already a known kidnapper, it looks like Finding Carter‘s Lori Stevens can also add “stalker” to her résumé.

In TVLine’s exclusive first look at Tuesday’s season finale (MTV, 10/9c), Carter gets her hands on some creepy photos of David and Elizabeth allegedly taken by Lori. The catch? They were taken way before the couple claims to have known their daughter’s abductor.

Of course, the real twist comes when Carter volunteers to help Elizabeth with Operation: Catch the Crazy Lady. But will she go through with it?

Hit PLAY on the preview clip below to find out how it all goes down, then drop a comment with your theories about tomorrow’s game-changing finale.