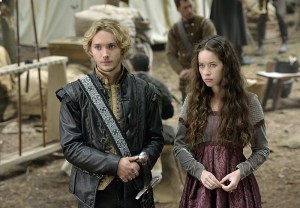 Forget the queen; when Reign returns for its sophomore season on Oct. 2, you’ll be saying, “God save everyone.”

The CW on Friday released new stills from its historical drama’s Season 2 premiere, which finds Francis heroically arriving at Lola’s side, just as we left him after last season’s finale. This new gallery also gives us our first look at Sean Teale as Conde, Francis’ new confidant — though knowing this show, I’m sure he’ll try to have Francis killed before the hour is up.

Speaking of which, it looks like Nostradamus’ days might be numbered, as the once-revered — and once-bearded — seer is taken into custody. (Seriously, though, where did his beard go?)

Lastly, there’s a glorious shot of Mary laying down the law, which was previously shared by TVLine as part of our Fall TV Spectacular.

Browse our gallery of season premiere photos below, then drop a comment: How do you hope the drama will play out next month?