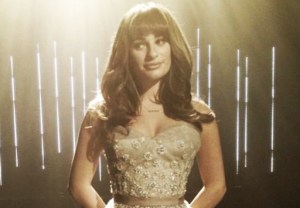 Confirming buzz from last week, the Glee actress on Friday tweeted a photo of herself filming a performance of that little indie track “Let It Go” from Frozen. Rachel Berry will indeed channel her inner Elsa — or her inner Adele Dazeem, whichever you prefer — for the show’s sixth season premiere, slated to air sometime in 2015.

As previously reported, the Fox comedy’s final season will find the gang returning to Lima, Ohio, to revive the New Directions, along with a few other no-longer-surprise twists.

The stars of Glee have actually been doing quite a bit of tweeting over the past few days, and we’ve assembled their best behind-the-scenes photos in a gallery below (including the first shot of Naya Rivera back in action).

Gleeks, what are your thoughts on the upcoming final season? What are you excited to see? Drop your hopes and dreams in the comments section below.