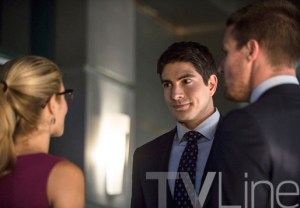 The babes come in all sizes as The CW’s Arrow let’s fly with its third season (starting Oct. 8), as seen in these exclusive photos spanning the first three episodes.

New to the Season 3 photo gallery below, you’ve got the first pics of Ray Palmer (played by Superman Returns‘ Brandon Routh). On the CW hit, “Ray is a businessman instead of a professor, more of an entrepreneur,” showrunner Marc Guggenheim told me. And as for his Atom-ic alter ego, “Part of the fun is seeing how, or even if, a character reaches the end of that trajectory,” the EP teases, “because as we’ve proven, we like to play around with it a bit.”

Now leading our gallery, meanwhile, are your first new photos of Diggle, who at season’s end learned from Lyla he was to be a father.‎ “Episode 3, titled ‘Corto Maltese.’ is a really big Dig episode,” showrunner Andrew Kreisberg told TVLine. As Oliver’s No. 1 helps Lyla track a rogue agent, “It’s really about the fact that he has a daughter now — how does that affect how he feels about the world and what he’s doing with Oliver?”

As David Ramsey’s character confronts that new reality, “Where Diggle is going this season is going to be really great,” Kreisberg avows.

In the meantime, can we semi-officially declare Diggle and his baby girl the Arrowcave’s new Dynamic Duo?