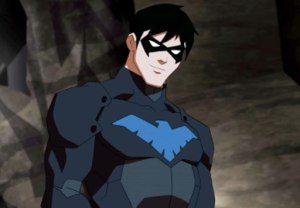 Teenagers these days — all they want to do is save the world.

According to multiple reports, DC Comics is nearing a deal with TNT for a drama pilot based on the Teen Titans, a group of young superheroes led by Dick Grayson, who makes the leap from sidekick Robin to full-fledged hero Nightwing.

Nightwing’s motley crew also includes the likes of Starfire and Raven. The Titans appeared in their own Cartoon Network animated series from 2003 to 2006, and can now be seen on the network’s far-less-serious Teen Titans Go!

The pilot is reportedly written by Akiva Goldsman and Marc Haimes. Goldsman would also serve as executive producer, with Haimes as co-EP.

But who will play the Titans, should the pilot get the green light? The Vampire Diaries star Steven R. McQueen has made it no secret that he’s dying to suit up as Nightwing, posting tons of pictures of his favorite crimefighter, but his character is very much alive and well on the supernatural CW drama, now heading into its sixth season.

Who would you like to see play the Teen Titans? Drop a comment with your casting suggestions below.