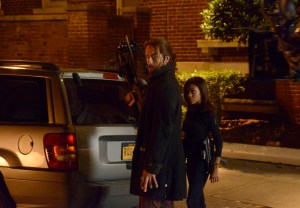 The town of Sleepy Hollow is officially becoming a war zone in Season 2 — like, even more than it already was.

New photos from the Fox drama’s Sept. 22 season premiere find Abbie and Ichabod — who obviously do make it out of a coffin and purgatory, respectively — patrolling the not-so-sleepy town, guns (and crossbows) blazing. We also see Jenny doing a bit of snooping, as well as Henry (aka War!) being his usual, terrifying self.

As Fox’s official (and obviously spoilery) description for the episode reads, “With Henry’s emergence as the Horseman of War, alongside the Headless Horseman, Sleepy Hollow has never been so close to destruction.”

In case you’re unclear, now would be the appropriate time to panic.

Browse our gallery of premiere photos below, then drop a comment with your thoughts on Season 2: How do you hope this all plays out?