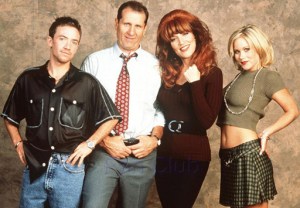 “Whatever happened to Bud Bundy from Married… With Children?” If you’ve ever lost sleep asking yourself that question — it’s OK, we’re not judging you — this news should be music to your ears.

A source has confirmed to TVLine that a pitch for a Married spin-off, focusing on David Faustino’s Bud, has been developed. Of course, a lot has to happen before a pitch can become a pilot, so don’t get too excited just yet.

Interestingly enough, this wouldn’t be Married‘s first spin-off. The Fox sitcom — which ran for 11 seasons from 1987 to 1997 — previously spawned Top of the Heap, a short-lived comedy starring Matt LeBlanc, which ran for several episodes in 1991.

E! Online first reported the possibilities of a Bud-centric spin-off.

The stars of Married… With Children — including Ed O’Neill and Christina Applegate — recently reunited in Los Angeles on Sept. 9 when Katey Sagal received a star on the Hollywood Walk of Fame: Would you watch a Married… With Children spin-off about Bud? Drop a comment with your thoughts on the potential project below.