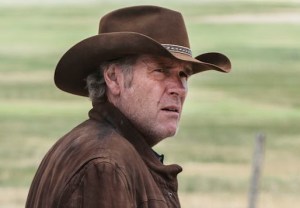 Might old-school Longmire wind up on one of them fancy, space-age “streaming” services?

Our sister site Deadline is hearing that Warner Horizon, which produces the beloved yet cancelled-by-A&E drama, is preparing to shop it to both cable and digital outlets in the coming days.

Netflix (which currently streams previous Longmire seasons) and Amazon are said to be among Warner Horizon’s streaming-service prospects, while Hulu and the burgeoning Yahoo Screen are considered to be long shots.

Ad-supported cablers are less likely to bite, as they must cater to a younger demo than the likes of Longmire attracts. (Despite being A&E’s most watched scripted series to date, Longmire wrapped Season 3 with an audience of 3.7 million viewers and a 0.6 demo rating among Adults 18-49, down 16 and 45 percent from its sophomore finale.)

Per Deadline, TNT — which originally developed (yet ultimately passed on) Longmire back in 2011, and where Last Ship and Major Crimes, for example, last pulled 4.4 mil/1.0 and 5.7 mil/0.8 — is not interested in offering the oater a new home.