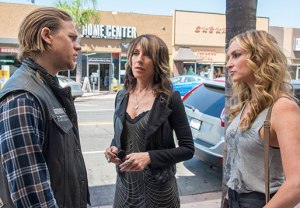 FX’s Sons of Anarchy opened its seventh and final season on Tuesday night with 6.2 million total viewers and a 3.2 demo rating (per TVByTheNumbers) — up 5 percent and a tenth from its penultimate premiere and hitting all-time highs on both counts.

The 105-minute opener was up 19 and 14 percent from December’s finale.

The post-show post mortem Anarchy Afterword not only likely clued a few people into the fact that “Jax” is British, but also drew 2.6 million night owls and a 1.4 rating.