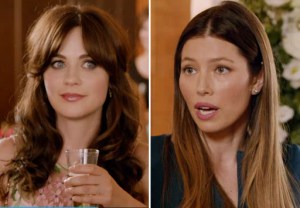 Nothing says “Happy Hump Day” like a video about procreation from New Girl‘s season premiere.

“Ted is the only eligible guy here, and we are his two best options for procreation,” Kat explains. “I am the better choice of mate, from a purely biological standpoint. You’re shorter, weaker and dumber — no offense, I love those shoes.”

From that point on, it’s a no-holds-barred battle for the best man, and not even Larry King — or at least a guy Jess thought was Larry King — is safe.

(BONUS: There’s also a nice blink-and-you’ll-miss-it moment between Jess and Nick around the 1:13 mark. A toilet is involved.)

Hit PLAY on the preview below, then drop a comment with your thoughts on New Girl: Are you hoping for a Jess-Nick reunion in Season 4?