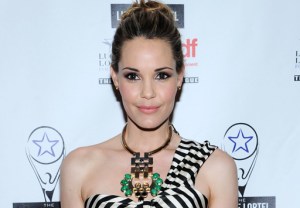 Leslie Bibb is going from one of the GCBs to, well, just a plain ol’ B.

Bibb, who recently appeared on NBC’s About a Boy, will play the titular character in Amazon’s new comedy pilot Salem Rogers: Model of the Year 1998, our sister site Deadline reports.

RELATED Fall TV Spectacular: Exclusive Scoop and Photos on 42 Returning Favorites, Including About a Boy

Her character, Salem Rogers, is a self-centered former supermodel who reunites with her former assistant — now a self-help writer — after completing a 10-year stint in rehab.

* Saturday Night Live has added two more writers to its staff for Season 40, Nick Rutherford and Alison Rich, per Deadline.

* The Simpsons is plotting another crossover (of sorts). According to Entertainment Weekly, the first family of Fox will encounter themselves — or, rather, the crudely drawn version of themselves from their Tracey Ullman Show days — during a segment in this season’s “Treehouse of Horror,” airing Oct. 19. “We’ve implied that [the original family members] were murdered and buried under the house, so this is expanding that thought,” says executive producer Al Jean.