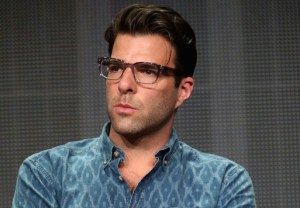 Heroes and Horror Story alum Zachary Quinto will deliver the titular, catalytic strike in The Slap, NBC’s eight-episode miniseries about how one man’s punishment of another couple’s child explodes into a complex family drama.

Emmy winner Brian Cox (Nuremberg) also has boarded the mini, which is based on an acclaimed Australian project and was written by Jon Robin Baitz (The West Wing).

Specifically, Quinto will play Harry, a married father who’s seemingly pleased with his life yet “perennially angry,” always game to pick a fight — but he picks the wrong target when he slaps the horribly misbehaving child of another couple, an action that ultimately exposes long-held secrets and ignites a lawsuit that challenges core American values.

Cox will play Harry’s father Manolis, “a stern yet magnanimous man… with old world values,” a peacemaker quick to defray any tension.

Peter Sarsgaard and Mary-Louise Parker have previously been cast. No airdate has been set.