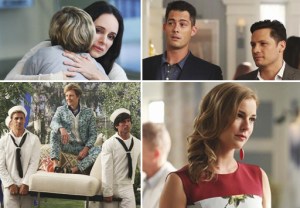 The Hamptons are being turned upside down as Revenge heads into its game-changing fourth season — and we’ve (finally) got the photos to prove it.

ABC on Tuesday released a whopping 47 stills from the Sept. 28 season premiere, revealing new alliances — Victoria cozies up to “Lisa Simpson” during lock-up — and, of course, new conflicts. Emily, in particular, appears to be having words with The Client List‘s Alicia Lagano.

Speaking of The Client List, this new gallery also gives us our first look at newcomer Brian Hallisay as Ben, who will have “great energy” with Emily in Season 4, according to showrunner Sunil Nayar tells TVLine.

“Emily has so much she’s already dealing with, we don’t want to be casual about the next person she chooses to give her heart to,” Nayar says. “We didn’t bring him on to be Emily’s love interest, but by the same token, we didn’t not bring him on for that.”

Thankfully, we can always count on Nolan — and his gaggle of sailor boys — to keep things light.

Other highlights from the gallery include Jack’s spiffy new haircut, our first look at Louise (Agents of S.H.I.E.L.D.‘s Elena Satine) and a shady looking Gideon moving in way too close to Charlotte.

Browse through TVLine’s gallery of season premiere photos below, then drop a comment with hopes for Season 4.