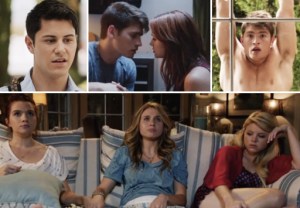 The second season of MTV’s Faking It promises to be even juicier than the first — that is, if the Hestor High gang can avoid being crushed to death under the weight of their collective guilt.

Yes, the g-word appears to be haunting all of our favorites in the official trailer for the comedy’s upcoming sophomore season — premiering Tuesday, Sept. 23, at 10:30/9:30c — following Amy and Liam’s oh-so-hot (but oh-so-wrong) hookup in the Season 1 finale.

“You’re only as sick as your secrets,” Liam proclaims, while Amy struggles to maintain a semblance of a normal friendship with Karma.

And speaking of secrets, Lauren’s boyfriend appears to drop a major revelation about why she’s been popping pills — and the gang’s collective gasp implies it’s going to be good.

Perhaps Shane’s two trailer outbursts best sum up the season in store: “Drama!” and “What does it all mean?!” (Indeed.)

Hit PLAY on the new Faking It trailer below, then drop a comment: How do you hope things will work out for Karmy in Season 2?