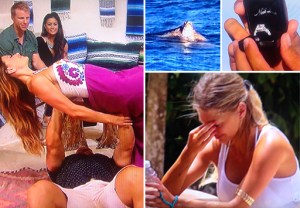 That’s what I yelled at my television last night after learning ABC was pre-empting the Season 1 finale of Bachelor in Paradise in favor of a football game. Way to disrespect the sanctity of marriage — or at least the sanctity of a marriage proposal sponsored by Neil Lane Jewelry and birthed from a petri dish of social isolation, alcohol, teeny bikinis and an unfailing commitment to staying on camera ’til death (or another reality show) do these wannabe celebrities part.

Oh yes, you read that right. We got a real-life marriage proposal at the end of what couldn’t have been more than two, maybe three weeks of filming these outcasts from The Bachelor/Bachelorette franchise competitively coupling up at a Mexican beachside resort.

Monday’s finale found host Chris Harrison challenging the couples to assess their “relationships” and decide whether to break up and go home, or stay together and spend one last night as couples in “fantasy suite” situations. I really wish, though, that our intrepid emcee had offered each cast member the option of a $10,000 check or continued romance — but then how would ABC have filled the two-hour timeslot after everyone took the money and ran?

I spent my morning watching this mess (so you don’t have to) — and now I’ll attempt to sum it all up via the ancient art of the screengrab. There are only 10 of ’em in the gallery below. Won’t you accept this rose and take the journey with me — then share your thoughts in the comments? 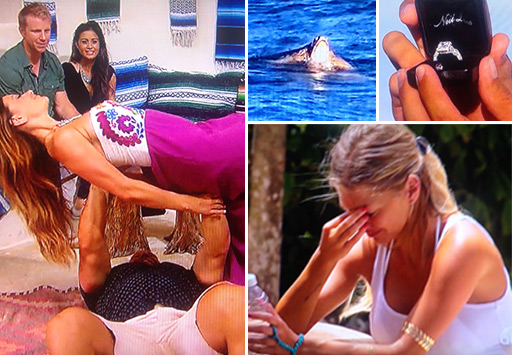