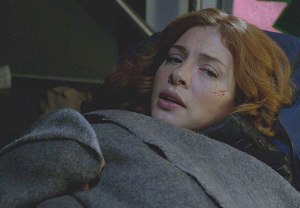 We’re in the home stretch of Under the Dome‘s sophomore season, and in this Monday’s episode, the outlook seemed bleaker than ever for folks in Chester’s Mill.

Indeed, the plummeting temperatures that came about last week — er, two days ago, in Chester’s Mill time — have gotten worse, turning the town into a frozen tundra. How did our gang of misfits handle the crisis? Read on for the finer details of “Black Ice”:

MAKING AMENDS | When the town begins to freeze over, Rebecca leads the efforts to turn the high school into a triage center. The first patient? Melanie — though her issues are hardly related to the cold. Instead, Sam and Junior are trying to sustain her after the egg-induced earthquake caused her to collapse. Plus, Melanie’s having an intense physical response (seizures, a weak pulse, the works) to all research that’s being done on the egg, which has landed in Zenith and is zapping away anyone that comes near it.

Also at the high school, Pauline gives Big Jim a majorly cold shoulder for tossing the egg over the cliff’s edge. Not only has the passage to Zenith been closed off, but Pauline’s visions have stopped and Lyle is still nowhere to be found. (Talk about putting all your eggs in one basket, eh? Thanks, I’ll be here all week!) Big Jim gives his usual spiel about doing it all for the sake of his family, but Pauline’s having none of it. Instead, she sits by Melanie’s bedside — the first time they’ve seen each other in person since “that night at the crater” — and apologizes for, y’know, leaving Melanie dead in a ditch 25 years earlier. Best friends forever…..?

TURN THE DOME AROUND | Elsewhere, Hunter, Joe and Norrie head to the edge of the dome to see if the egg’s swan dive caused the dome to come down. No such luck (obviously), but there is something curious going on at the barrier: The dome is actually rotating, something Joe learns the hard way when he momentarily gets his hand stuck to the frozen glass of the dome. (Come on, Joe, haven’t you ever seen A Christmas Story? You should know better.) The trio share their findings with Rebecca, who determines that the atmosphere inside the dome is inverting — in other words, all the cold air is getting pulled down, hence the Frozen situation we have going on here.

Later, Norrie and Joe (finally) get suspicious of Hunter, particularly his fascination with the egg. When Hunter follows a distraught Norrie out into the hallway, Joe takes this opportunity to rummage through Hunter’s things — and finds plenty of incriminating evidence against the tech whiz, including e-mails from Don Barbara re: research on the egg, as well as a notepad that Hunter’s been using to have egg-cellent chats with the guards outside the dome. Unfortunately for Hunter, Norrie informs him that it won’t do any good to poke and prod the egg in Zenith, considering the only people who can safely touch it are inside the dome. Oops.

ICE, ICE, BABY | Barbie and Julia are driving an ambulance over to the Sweetbriar Rose, where they plan to pick up food and bring it back to the school. But when Barbie swerves on a patch of ice, the ambulance overturns and Julia — who, darn the bad timing, was attempting to tie down a gurney in the back — takes a metal rod straight through her leg. At first, staying in the ambulance for warmth seems like a swell plan (and Barbie shows off his MacGyver skills by fashioning a candle from petroleum jelly), but a window in the ambulance roof cracks and shatters. So, there goes that.

But wait! There’s a bright side! Kind of! Barbie realizes that he can remove the rod from Julia’s leg without her bleeding out, but he has to induce hypothermia so her blood flow will slow. (I cannot even comprehend the level of trust that this Barbie/Julia relationship requires. Remember that one time he killed her husband?) But the plan works, after all: Barbie removes the rod, performs some touch-and-go CPR on his woman and, once Julia comes to, they cozy up by the oven/fire. Nothing more romantic than a near-death experience.

* Upon visiting the lake to see if any boats will have spare fuel (spoiler alert: they do!), Big Jim rescues Lyle, who has finally emerged from the water and shares his visions of the world going up in flames very soon.

* At daybreak, the temperature in Chester’s Mill thankfully creeps back up, but Rebecca notices the barometric pressure is higher than it should be. (I sense another Disaster of the Week in the near future!)

* Joe and Norrie follow Hunter to the dome’s edge, where he’s exchanging more notes with a guard on the other side. They’re rightfully furious at first, until Hunter shows them his latest message: “Stop examining the egg. Potential catastrophic effect for Zenith.” So he’s on their side after all! But the happy moment is fleeting — as are all happy moments in Chester’s Mill — when the dome suddenly produces an ear-splitting shriek… and actually starts contracting.

OK, your turn. What did you think of the episode? Didn’t Barbie and Julia’s hypothermia scenes seem like a less tragic Titanic? And might this week’s product placement for the Toyota Prius be the show’s most blatant yet? Hit the comments!