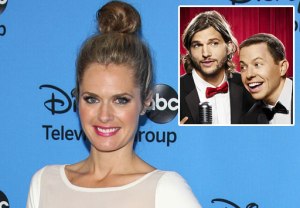 Maggie Lawson is going to put a baby in Two and a Half Men, or at least she’s going to try.

The Psych alumna has booked a recurring role on the final season of the CBS sitcom, our sister site Deadline reports, as a social worker who assists Walden (Ashton Kutcher) and Alan (Jon Cryer) in their mission to get married so Alan can adopt a child.

Though the controversial storyline is sure to draw some ire, CBS Entertainment chairman Nina Tassler doesn’t believe there’s any cause for alarm.

“I think it’s a very positive statement,” Tassler told reporters in July. “[Walden believes he is] going to adopt a child as a gay couple, and the reality is he can do that. In a universe where at one point you couldn’t do that, and now you can, I think that’s a much more positive statement that he’s making.”

* Baby Daddy is heading to the hospital — General Hospital, that is. The ABC Family comedy will stage a crossover (of sorts) with the ABC soap opera during a Season 4 episode in which Danny (Derek Theler) is offered a small cameo opposite guest-star Kelly Monaco, Entertainment Weekly is reporting.

* Connie Britton (Nashville) will lend her voice to an October episode of Family Guy, per EW. She’ll appear in a cutaway scene, during which Peter breaks into her home and chews on her hair.