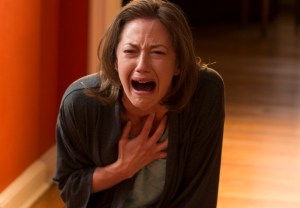 In Sunday’s season finale of The Leftovers, the Guilty Remnant’s cruel, creepy dummy stunt nearly drove our favorite TV heroine out of town — the key word there being nearly. In the final moments of the episode, Nora — played by the transcendent Carrie Coon — was given a reason to stay, and we breathed a huge sigh of relief. (We really, really love her.)

But will Nora be back for Season 2? In the following Q&A, Coon tackles that “terrifying” question, and also reacts to the surprising element that was cut from her big breakdown scene, weighs in on how it really felt to hose down Liv Tyler, and offers a tiny ray of hope to Kevin-Nora ‘shippers.

TVLINE | How do you prepare for a scene like the one in which Nora comes downstairs to find her ‘family’ returned?
I have to give a lot of credit to my crew and my director [Mimi Leder], because they left me alone. I got to be upstairs in the house [where] we were shooting and be by myself. And be quiet. When you have to do something like that eight times to make sure they get coverage… the nature of catharsis is you’re letting everything back out. And when you’re doing another take, you just shove it back in and start over. And nobody talked to me, they let me go back upstairs between takes. Mimi’s direction was very minimal. She didn’t get in my way. She just let me be and breathe. And I’m so grateful to them for that. It’s a very respectful set. They’re so respectful of the actors’ process.

TVLINE | What kind of dark place did you have to go to?
I’m not a mother… yet. So I don’t have that automatic connection. But I have a lot of empathy. I had read Wave, the book by [Sonali Deraniyagala], who lost her entire family in the 2004 tsunami. And there’s a moment where some fishermen find her standing up, covered in mud and spinning in a circle. Just spinning and spinning, because she had been spun by the water. And that was what I was thinking of, this kind of devastating and immediate loss.

TVLINE | Did you know when they shot the scene that there was going to be no audio?
I didn’t, in fact. I think that was a choice they made in post[-production]. I actually do make sound, probably pretty terrible sounds. It would be interesting to hear what Mimi and [exec producers] Tom [Perrotta] and Damon [Lindelof] have to say about that decision. I saw it when you saw it [on Sunday night] and I was surprised, because so much of that moment for me was about the sound coming out of my body and trying to get in touch with something primal. So it was fascinating to see it be silent. It was quite effective.

TVLINE | How creepy was it when you saw the stuffed replicas of Nora’s family sitting at the table?
Oh, gosh. So creepy. All of us kept walking by the doorway to the dining room and doing double takes. We never got used to the idea that there were dummies there. It always felt like a person was sitting in the chair. And I, of course, had just shot Episode 9 [the flashback episode where we meet Nora’s family]. So I was on set with [TV hubby] Sebastian Arcelus and the kids, and had this very real and loving and fun artistic experience with them for 10 days. And so it was heartbreaking to not have them there. It was nice to have that time to build a relationship with them so… that I could lose them in Episode 10. [Laughs]

RELATED The Leftovers Renewed for Season 2

TVLINE | I didn’t read the book, so when Nora was writing that letter to Kevin, I was genuinely worried she was going to kill herself.
I’m so glad you had that experience. Of course, as the actor, I knew going in what Nora was doing. I knew she was leaving town. But I love that the audience had a more ambiguous experience. There’s something really powerful about ambiguity in moments like that.

TVLINE | Clearly, Nora melts at the sight of Christine and Wayne’s baby. Does she take that as a sign that she needs to stay, a sign that things will get better?
Everyone has an immediate, internal response to new life. I’m not saying necessarily a maternal one. But we’re all aware as we’re getting older of our own degradation. My friend Anna Shapiro, a director, said the other day, “Young people glow, don’t they? And as you get old, you don’t glow anymore. You’re sort of drying up.” We all have this immediate response to newness and youth and beauty. So it makes sense to me that her body immediately goes to that place, especially because she’s a woman who also had the experience of giving birth to two children. It’s beautiful that Nora drops right into that place. And it is hopeful. TVLINE | What is your take on Nora and Wayne’s embrace in Episode 6? Did he heal her in some sense? Was there magic to him?
Nora would be inherently skeptical about that kind of claim. Had she heard of Holy Wayne before that experience, she would’ve dismissed him. The episode is beautifully constructed so that they put Nora in such a vulnerable place; she’s more open to things. Also, Nora hadn’t been intimate with another human being for a very long time. I think allowing even physical contact is a tremendous release, whether or not it’s magic, spiritual or physical. It creates a tiny, tiny space so she can move forward in her life with Kevin. She’s tiptoeing into a more hopeful place. And that’s what puts her in the place to sit with those dummies [in the finale] instead of going out into the world and raging. The conference and Holy Wayne really set her up to sit inside of that moment and have this silent communication with her family so she can consider the next step.

TVLINE | Do you get invested in the show as a viewer as well as an actor — insofar as, it feels as good for you turn a hose on the Guilty Remnant as it does for viewers to see Nora do it?
[Laughs] I get excited about it, yeah. And Liv [Tyler] was so great when we were shooting that. She said, “I think you should hit me in the face. Just hit me right in the face.” I said, “Well, maybe we should start on your chest and move on to your face.” [Laughs] She was totally into it, and wanted to take it.

TVLINE | The Season 1 finale takes us to the end of the book. Is it exciting, and slightly terrifying, to know that there’s no road map for the show moving forward?
There’s no template for what’s coming, which is thrilling. And, sure, terrifying. I hope I get to keep doing the show. [The actors’ contract options are] not officially picked up yet. It’s still in that process. But, yeah, it’s terrifying. You want to keep making something good. But I also trust them. They’re making bold choices. I’d rather make controversial art than something everybody loves. The worst kind of art to make is the kind where people walk out of the theater or turn off the TV and say, “What’s for dinner?”

TVLINE | I’m really rooting for Kevin and Nora.
Well, I’m glad to hear that. That sounds like good fuel for Season 2, doesn’t it?