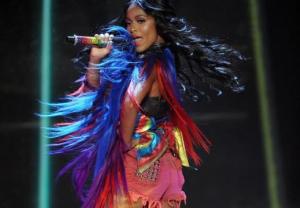 G.R.L. pop singer Simone Battle, who rose to fame on the U.S. version of The X Factor, has died of an apparent suicide, according to reports. She was 25.

Per TMZ, Battle’s body was found in the bedroom of her Los Angeles home on Friday.

Although quickly eliminated during The X Factor‘s first season (where she was mentored by Simon Cowell), Battle made her mark; she landed a spot in the Pussycat Dolls reboot G.R.L.

“I am so sad to hear about the news Simone Battle has passed away,” Cowell said on Twitter. “She was such a fun nice person. It’s such a loss. Rest in peace Simone.” Added fellow Season 1 judge Cheryl Cole: “Such tragically sad news to hear of the passing of Simone battle,” she wrote. “My thoughts and prayers are with her loved ones. #RIPSimone.”