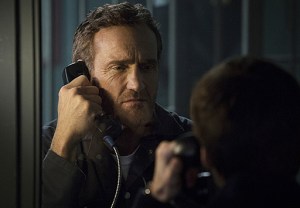 The CW on Friday released new images from the series’ Oct. 7 premiere, which include a tender shot of Barry Allen (Grant Gustin) speaking with his incarcerated father, played by John Wesley Shipp, who originally donned the suit on CBS’ short-lived ’90s version of The Flash.

“Given his history with The Flash, [executive producers] Andrew [Kreisberg], Geoff [Johns] and I could only think of one person we wanted to play Barry’s father and that was John Wesley Shipp,” EP Greg Berlanti said of Shipp’s casting back in May. “He gives a fantastic and emotional performance in the pilot and we are looking forward to his presence in many more episodes.”

Click through our gallery of new images from the pilot below, then drop a comment with your thoughts on The Flash. Will you be tuning in?