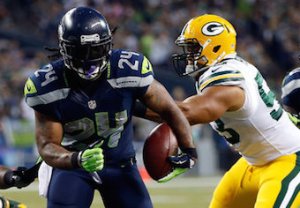 NBC’s Sunday Night Football on Thursday night kicked off its new season with big numbers — 26.9 million total viewers and a 10.2 rating (per finals).

As such, it was up 7 percent from last year’s opening game and ranks as the third-most watched NFL Kickoff game in the 13-year history of the event.

Facing off against football, ABC’s double-pump of The Quest averaged 1.85 mil and a 0.5 — more or less on par with last week’s numbers.

NEXT THURSDAY: NBC’s The Biggest Loser, CBS’ Thursday Night Football and Syfy’s Haven (which now is airing at 8/7c) all premiere.