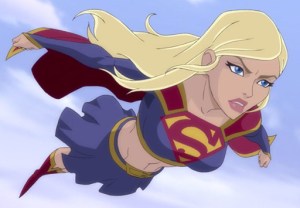 Tired of playing second fiddle to the man in blue — and why should she? — Supergirl might finally be getting her day in the sun.

A new series based on the iconic DC heroine is currently in the works at Warner Bros. TV, according to our sister site Deadline. Greg Berlanti — who, among many other things, currently oversees production on The CW’s Arrow and The Flash — has reportedly been tapped to executive-produce, along with Ali Adler. The duo previously worked together on ABC’s short-lived superhero drama No Ordinary Family.

Prolific writer Geoff Johns is also reportedly going to be involved in the project in some way, though no further details are available.

This potential Supergirl series is being described as a fresh take on the heroine’s origin story. Supergirl (aka Kara) was most recently portrayed by Laura Vandervoort on The WB/CW’s Smallville.

Your thoughts on a potential Supergirl series? Any dream casting suggestions? Drop all your thoughts in a comment below.