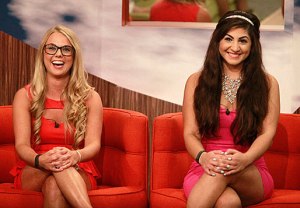 Before Thursday’s episode of Big Brother even began, I knew how I was going to start this recap.

I was going to talk about how dull this season has been, how the Detonators have easily steamrolled over their fellow houseguests all summer and how we all know Derrick is going to win this thing, unless something major happens in the next couple of weeks.

And while Thursday’s double eviction episode didn’t flip the script that much, it certainly did bring one houseguest’s journey to an unexpected end.

PHOTOS  Big Bang Theory Premiere Pics: Sheldon Returns — But Where Are His Pants?

THE WEEK SO FAR | This week actually began with a teeny, tiny pinprick of light at the end of the tunnel for Nicole. Even though the Detonators continued to perceive her as a competitive threat — for reasons that still baffle me as I write this — Derrick, Cody and Caleb finally clued into Christine’s untrustworthiness. They put her on the block next to Nicole, agreeing that Nicole’s inevitable eviction could wait another week. It was all falling into place so perfectly!… until Christine triumphed in the Power of Veto competition and promptly removed herself from the block. And even though Caleb and his cronies contemplated — can I pat myself on the back for that alliteration? — backdooring their equally shady ally Frankie, Caleb ultimately squashed what was probably his last chance to make a big strategic move this season that was actually his to make. He decided to nominate Victoria instead — all the while delivering an appalling speech about how Victoria shouldn’t fret, because Nicole’s still Public Enemy No. 1 — and prompted Victoria to make her most astute Diary Room observation ever: “He’s just a wimp.”

So, it’s a somber mood (for Nicole fans, at least) heading into the double eviction — but the evening wasn’t entirely without its highlights. Here’s how it went down:

* Before the live festivities begin, we get a glimpse at the last few days in the BB house, where, in the spirit of this season’s contestants confessing all their sins to each other, Caleb admits to Frankie that he considered backdooring him. Frankie’s reaction is essentially, “Moi?!” and, although he’s not surprised to learn that he’s becoming a target among the Detonators, he is concerned with who brought up the backdoor plan. Caleb pins it on Cody, Derrick gets evasive and Frankie is skeptical of the whole lot of ’em.

* The night’s first eviction isn’t a surprise to anyone, not even Nicole, who gives a surprisingly gutsy goodbye speech to the contestants: “Let’s stop playing Big Baby, let’s start playing Big Brother and let’s make some big game moves!” She’s got no chance of staying — evidenced by the 4-0 vote to boot her — but her last-minute moment of gumption earns cheers from the studio audience and a “Well done!” from Julie Chen (which feels a lot like that moment in The Devil Wears Prada where Meryl Streep’s character gives her steely nod of approval). Oh, and in case you’re wondering how Nicole and Hayden’s showmance is going, here’s an adorable schoolyard moment from the jury house: “We both admitted we liked each other!” Presh.

* The final six contestants head outside for a Q&A-based Head of Household competition, which Derrick wins in one question. (Given Derrick’s track record with competitions, does anyone else think he was actually trying to throw the HOH challenge, and accidentally won? Theorize in the comments!) Regardless, Derrick’s HOH reign plays out a lot like the last season of Game of Thrones, except instead of Daenerys listening to the requests of her people from atop a throne, Derrick waits in one of the house bedrooms while each remaining houseguest enters, pleads his or her case not to get nominated and leaves Derrick alone. But the men of the Detonators seem to have a rock-solid plan: Victoria and Christine will go up on the block (with the goal of evicting Christine), and Frankie will be the replacement nominee if Christine wins the Power of Veto.

* That plan goes about as smoothly as anyone could have asked for. Frankie pulls out a Power of Veto victory, leaves Derrick’s nominations as they are and Christine is swiftly evicted in a unanimous vote. And not only does Christine bolt out the front door without saying goodbye to anyone, but she’s met with overwhelming boos from the studio audience. (Which the houseguests can totally hear, by the way: “That means we made the right decision!” Frankie says, while the rest of us just sit back and let it sink in that Victoria is probably going to win $50,000 in a couple of weeks.) And in case your memory needs jogging, the last time a houseguest was booed that hard, Season 15 contestant Aaryn was getting skewered for her racist comments. Lesson learned: Cozying up to a guy who’s not your husband all summer will put you on the BB viewers’ blacklist.

* Before we’re left to eavesdrop on the houseguests, Julie informs us of yet another twist: the Big Brother Rewind button, which, if pressed sometime in the next week, will bring Wednesday’s live eviction to a screeching halt and reset the events of the entire week (meaning that next week’s nominees could feasibly avoid eviction altogether). Am I a cynic for thinking that this twist will probably be a flop? (No need to answer that. I’m definitely a cynic.)

What are your thoughts on Nicole and Christine’s evictions? Did you think the Power of Veto competition was a little too easy? And might Jeff and Jordan’s return to the Big Brother house already be the highlight of next week’s episodes? Sound off in the comments!