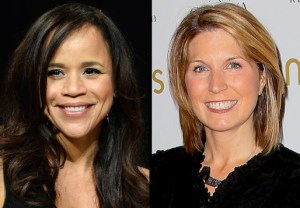 Whoopi and Rosie, it’s time to meet your respective matches.

Both women have served as guest co-hosts on the daytime series — Perez in February, and Wallace three times in the past. They’ll replace former co-hosts Sherri Shepherd and Jenny McCarthy (who exited the talker last month) and sit alongside Whoopi Goldberg and returning co-host Rosie O’Donnell. (Two Rosies at one table? That won’t be confusing.)

“These are powerful and accomplished women from different walks of life who have had amazing personal and professional experiences. Each brings incredible perspective and information to the table,” said The View executive producer Bill Wolff (who replaces exiting EP Bill Gedde).

How’s The View looking with Perez and Wallace on board? Tell us your thoughts in the comments section below.