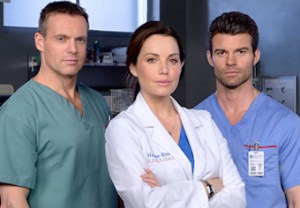 Paddles!!! Saving Hope is being brought back to life Stateside.

TVLine has learned that ION Television has reached an agreement with Entertainment One Television to host the upcoming 18-episode third season of the Canadian-produced, Erica Durance-fronted medical drama, as well as get dibs on repeats of the first two cycles.

Saving Hope Season 3 debuts Sept. 22 on Canada’s CTV; no timetable has yet been announced for ION’s broadcasts.

RELATED Erica Durance: Saving Hope Is Not a Sorrowful Ghost Story But a ‘Wonderful Love Story’

NBC had broadcast Saving Hope’s freshman run during the summer of 2012, then opted not to pick up Season 2.

ION, meanwhile, similarly has played host to Canadian offerings such as Flashpoint, The Listener and Rookie Blue repeats.