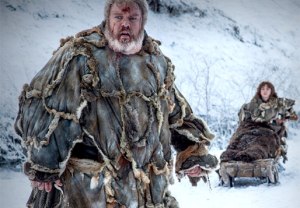 Two or three more characters will be absent from Game of Thrones‘ upcoming fifth season — but don’t worry, they haven’t been killed off (yet).

According to Kristian Nairn, who plays Hodor on the HBO fantasy series, there are no plans to include his less-than-chatty alter ego or Bran Stark on Season 5 of the show. (We can probably assume their traveling companion Meera will also be warming the bench for the next round of episodes, too.)

“We have a season off and we have a year’s hiatus, solely because I imagine our storyline is up to the end of the books,” Nairn revealed in a recent interview. “So, I get my year off now to do [my DJ show] Rave of Thrones and gallivant all over the world.”

At the end of Season 4, Bran & Co. had encountered a manifestation of the three-eyed raven, losing pal Jojen in the process, but that storyline will seemingly be tabled. In the meantime, Season 5 will introduce the Westeros region of Dorne, as well as several new cast members, including Jonathan Pryce (the Pirates of the Caribbean films) and Alexander Siddig (Star Trek: Deep Space Nine).

What do you think of Bran, Meera and Hodor’s hiatus? Drop a line in the comments with your thoughts.
https://www.youtube.com/watch?v=CBAMy6sewMc