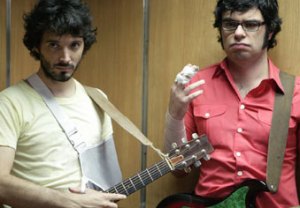 One of the Internet’s saddest games of “Telephone” got “Flight of the Conchords Returning to HBO” trending on social media on Tuesday night. Except that it isn’t. Nor should anyone logically have made such a leap.

In an interview with the UK’s The Guardian, actor/musician Jemaine Clement was asked what might be next for New Zealand’s fourth most popular guitar-based digi-bongo acapella-rap-funk-comedy folk duo, and he shared a wish list that included a movie or musical.

In the next paragraph, Clement revealed that he and Conchords director Taika Waititi are working on a new, four-episode comedy project for HBO — and some reporters hastily connected the two adjacent thoughts. (The Flight of the Conchords series ran for two seasons on HBO.)

An HBO spokesperson confirmed late Tuesday for TVLine that Clement indeed was not referring to a Flight of the Conchords revival on the pay cabler but something new (as the original story clearly said), while Clement himself took to Twitter to clear up the remarkable misunderstanding:

Before this rumour gets out of hand – we are not working on a 4 ep Conchords show for hbo… https://t.co/q1607H5vg8

TVLine will of course keep you posted as any details on HBO’s new Clement/Waititi project become available.