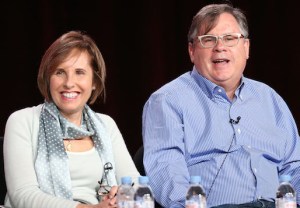 The Good Wife creators are taking politics to a gory new level.

The hourlong project — titled Brain Dead and written by the Kings — is described as The West Wing meets The Strain. The potential series takes place in the world of politics at the nation’s capital.

Brain Dead is part of the Kings’ new three-year deal with CBS TV Studios, which will also keep them on as executive producers/showrunners on The Good Wife.