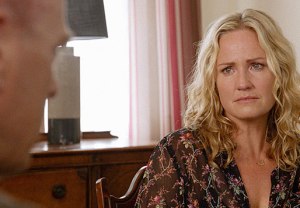 On Monday’s Under the Dome, a whole lot of elements that we haven’t seen in weeks came back into play.

And I’m not just talking about Barbie, Sam, Hunter and Pauline returning from Zenith. No, our latest hour in Chester’s Mill also featured the first Disaster of the Week in a while, a brand spankin’ new premonition from Pauline and — most bittersweet of all — the brief return of Angie.

Here’s what went down during “The Fall”:

NOT-SO-WARM WELCOME | We find Big Jim exactly where we left him — staring, flabbergasted, at his very-much-alive wife — and it seems this sheriff is none too pleased about Pauline faking her death. Pauline reveals that Reverend Lester Coggins, ever the shady Chester’s Mill resident, helped her fake the car crash that “killed” her nine years ago, but Big Jim is having none of her pleas that she did it to protect her family. And Pauline doesn’t make a very convincing case for herself, either. Take, for example, her response when Big Jim asks why she came back to Chester’s Mill: “For Junior! [long, awkward pause] …and you.” Big Jim is rightfully skeptical of his wife’s return, and Pauline is rightfully skeptical that her manipulative husband has changed. But all of that is forgotten for a while after Junior walks in, having made his way home from the storm cellar, and Pauline is finally reunited with her son.

Speaking of Junior, he’s on a mission of his own this week. Although Pauline tries to justify Sam killing Angie, Junior is still plenty pissed about her murder and tracks Sam down to get a little revenge. After bloodying up his uncle with kicks and punches, Junior raises an ax to finish the job — but just before he can, a vision of Angie appears to stop him! This is the second time during the hour that dearly departed Angie appears to Junior — the first time comes at the top of the episode, when Melanie plants a kiss on Junior before leaving the storm cellar. (“You’re going to want to follow your heart. Don’t,” Angie warns, showing off an unsightly head wound.) This time, though, Angie assures Junior that his uncle still plays an important role in the dome’s mystery. As much as Junior wants to off Sam, he can’t quite bring himself to do so, ultimately swinging the ax into the floor just near Sam’s head.

BROTHERS & SISTERS | Oddly enough, Junior and Sam’s tussle isn’t the only strange family reunion during the hour. After leaving the storm cellar, Melanie finds Barbie and Julia, who try to persuade her that taking the egg to Zenith is the best decision for everyone. It’s then that Barbie shares with Melanie his childhood memory of her, when she watched him mark the root cellar door with a handprint years ago. Barbie also remembers that his dad was involved with a woman named Laura, with whom he had a daughter, before he married Barbie’s mother. In short? That daughter from years ago is Melanie, making her Barbie’s half-sister. The surprises, they just keep on coming!

POWER DOWN | For most of this hour, our attention is on the egg — which pretty much deserves its own billing on IMDb at this point. Although Julia and Rebecca are skeptical at first about making the leap into Zenith and taking the egg with them, Barbie convinces them that the egg is the best leverage they have against the officials outside the dome. Plus, things are getting increasingly worse in Chester’s Mill: The dome seems to be accelerating the seasons, causing the temperature to drop and the leaves to change. (This week’s Captain Obvious Quote goes to Julia, who makes this observation: “It’s like it’s fall. Except it’s summer.” Bravo!) So, it’s decided that Julia will make the free-fall first, followed by everyone else in Chester’s Mill, with Barbie, Melanie and the egg bringing up the rear.

But the egg starts to wreak plenty of havoc before this plan can be brought to fruition. From its hiding place in the storm cellar, it begins to emit pulses of light, all the while making a high-pitched screech. Pauline is able to hear the noise and is overcome with a new vision that depicts “the end of everything.” Big Jim, having no idea how to cope with Pauline’s frantic painting, locks her inside with her artwork, then tracks down the egg by following its cries. He’s met by Joe and Norrie — who worked with techie Hunter earlier in the episode to fashion a radar gun and determine the egg’s location — and he forces them to the edge of the cliff at gunpoint. There, Big Jim makes his most boneheaded move yet, knocking the egg out of Norrie’s hands and letting it fall over the cliff’s edge.

The egg’s disappearance leads to a massive earthquake in Chester’s Mill, one that causes Melanie to collapse. Barbie and Julia take her to Sam, who’s sporting quite the bloody nose, and even though he’s able to revive her, she’s hardly healthy. (Let’s also take a brief moment to discuss how Melanie once dated Sam, and is now making moves on his nephew. Are you all sufficiently weirded out? Great, let’s move on.)

Also during the earthquake: Pauline’s visions come to a screeching halt; Joe and Norrie make a narrow escape from the tunnel, with Hunter’s help; and former sheriff Phil (who earlier had overheard Norrie talking about the passage into Zenith) manages to escape his jail cell and sprint over to the high school. Barbie and Julia spy Phil climbing down into the the tunnel, but when they follow him underground and shine a flashlight over the cliff’s edge, they realize that the egg’s disappearance has caused the passageway to close. (All together now: Nooooo!) In turn, Phil is dead at the bottom of the cliff, gruesomely impaled.

What did you think of the episode? How do you think the season’s final three episodes will play out? And why isn’t anyone more concerned that Lyle is seemingly trapped in limbo? Hit the comments with your thoughts!