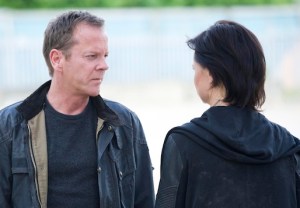 Has the 24 movie’s time finally come?

TVLine has learned exclusively that talks to bring Jack Bauer to the big screen have quietly gathered steam in recent weeks.

According to sources, Imagine Entertainment — perhaps buoyed by the positive buzz generated by Fox’s 24: Live Another Day revival — is kicking around a new feature idea. Imagine Chairman Brian Grazer is said to be particularly keen on the pitch, which has yet to be brought to 20th Century Fox.

Last winter, while promoting 24: LAD, Kiefer Sutherland maintained that the 24 movie still had a (faint) pulse. “The film’s an ongoing situation,” he said. “There’s always an opportunity to do that.”

The current movie chatter is complicated somewhat by the fact that Fox, the television network, will likely want to mount another 24 miniseries in the near future.

“I loved this year’s season of 24,” Fox Networks Group Chairman CEO Peter Rice said in July. “I’ve always been a fan. We haven’t had a specific conversation about it coming back yet, but I’m sure we will in the future. It’s a wonderful franchise. When you look at the show itself, it has many more stories to tell. I think we need to sit down and talk to the creators.”