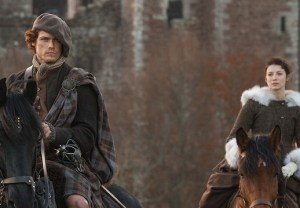 Mix the pomp of the biggest wedding you’ve attended with the awkward tension of your family’s worst holiday dinner, and you’ve got an inkling of what The Gathering – which takes place in this week’s episode of Outlander – is like. Can you really blame Jamie for avoiding it for as long as possible?

But when Claire’s escape plans go awry, the redhead winds up having to do some tricky diplomatic work just moments after someone clobbers him on the head. Again. Try not to think about how many concussions young Mr. Fraser has sustained throughout his relatively short life, and instead let’s review what happens in “The Gathering.”

GANG’S ALL HERE | As the hour opens, Claire is a woman on a mission. She’s going to use The Gathering, aka the semi-regular assemblage during which all MacKenzie men pledge their loyalty to Colum, as a cover for her escape from Castle Leoch. With all of the drunken revelry and assorted distractions, she figures, she’ll easily be able to slip away and make for the stones at Craigh na Dun.

Almost no one notices her squirreling away food and sizing up a suitable horse – except for Geillis Duncan. While delivering some port to Claire’s surgery, Geillis notes Claire’s small horde of snacks and muses that perhaps the castle healer is knocked up. Of course, she’s not; in fact, we learn that Claire and Frank tried to have kids but weren’t successful. “Maybe you’re barren,” Geillis blurts out. (Side note: I kind of love Lotte Verbeek’s portrayal of Ms. Duncan, with the cooing weirdness, blunt observations and crazy eyes.) Claire’s pal goes on to drop some fortune-cookie realness – “Sometimes you find yourself on a path you never expected. Doesn’t mean it can’t lead you to a bonny place.” – and some actual good advice (“The highlands are no place for a woman to be alone.”) before taking off.

Claire thinks she’ll leave while The Gathering is getting going. Um, Claire? Mrs. Fitz would like ye to think again, lass. OATHKEEPER | After she’s been gussied and beribboned and trussed up (good God, in that tight bodice, Caitriona Balfe’s bust looks like it wants to escape almost as much as Claire does), Ms. Beauchamp enters The Gathering and passes a few familiar faces along the way. Do you recognize the dark haired man in the frame as she walks in, or the woman with whom Mrs. Fitz trades smiling barbs on the balcony? They’re executive producer Ron Moore and series author Diana Gabaldon, the latter serving up a very respectable Scottish brogue.

Murtagh translates the proceedings, all in Gaelic, for Claire. Basically, all the men of fighting age must get up and say they’re willing to take up arms in defense of Colum and the MacKenzie lands. Dougal gets the vow-making started, but he doesna look very happy about it. Then again, does this man look very happy about anything?

Claire flits out of the main room, grabs her things and is about to put the castle in her rearview when Laoghaire knocks at her door, asking for a love potion to use on Jamie. Recalling the makeout sesh she witnessed in the previous episode, Claire wonders why the girl needs such a thing. Turns out that while Laoghaire might evoke the interest of Jamie’s nether regions, she wouldn’t mind having his heart and mind, too. Claire gives her powdered horse dung (side note: APPROPRIATE) and tells her to sprinkle it at his door while chanting a Wizard of Oz-inspired incantation.

THWARTED TIMES TWO | The next event in Claire’s get-me-the-hell-outta-here Olympics: evading handsy drunken clansmen. Dougal appears to be of help… until he reveals himself as the drunkest, handsiest clansman of all. He kisses Claire roughly, but when he starts to realize that she’s going on the lam, she brains him with a nearby stool. Then she’s on to the stables, where she’s just about to steal a horse when she trips over… Jamie!

“Jesus H. Roosevelt Christ!” she squeaks in surprise. “No, Sassenach. Just me,” he replies, grinning as he puts away his blade. (You can’t know how much I wish that were a euphemism. Knowing what’s ahead means I have no patience, Outlander. None!) He instantly deduces her plan and talks her out of it; after all, he says, there are extra guards in the woods to protect the clan stronghold during the party, and she’d never make it far even if she did somehow evade instant capture. With a voice like a cashmere throw knitted by kittens sipping hot cocoa, Jamie sympathetically tells her he’ll see her safely back to the castle.

Too bad they get caught on the way back in, and that Jamie is knocked out cold and forced to appear before Colum – something he’d evidently been avoiding. In the kitchen before he enters The Gathering, a revived Jamie changes into a more suitable outfit but rejects a brooch bearing the MacKenzie clan motto: Luceo non uro, or “I shine, not burn.” Though Jamie does have MacKenzie blood in him, he’s of another clan with a different motto: Je suis prest, or “I am ready.” And when a firelit Sam Heughan gazes into the middle distance and utters the phrase with conviction, je suis dead.

YOU CHOOSE AND THEN EVERYTHING CHANGES | As Jamie approaches Colum’s chair, Murtagh explains to Claire why the room feels so tense. If Jamie swears the oath and enough clansmen want him to be the next laird, it will be seen as an insult to Dougal, who’d been thinking that he would succeed his brother as clan boss. So Dougal would probably kill Jamie soonish. But if Jamie doesn’t swear the oath, he’ll be seen as an ungrateful jerk who’s been feeding at the MacKenzie teat for some time now. So Colum would probably kill Jamie soonish. And with a price on his head, Jamie can’t exactly just go somewhere else.

If the young man had just stayed hidden until after The Gathering, Murtagh continues, both uncles would’ve let him go without taking a formal stand. But because he was helping Claire back to her room… “Oh God, this is all my fault,” Claire says, heart sinking. “Aye, ’tis,” Murtagh confirms. (Heh.)

But Jamie’s smarter than pretty much anyone there gives him credit for. He doesn’t take the oath, but he does passionately pledge his obedience to Colum and says that he’ll do whatever is necessary, thereby making both uncles unlikely to off him in the near future. (Though Dougal still engages in a no-holds-barred game of shinty – or at least, that’s what it looks like – with his nephew later on.)

PIGHEADED | A chagrined Claire attends the next morning’s boar hunt at Colum’s request; these things tend to get bloody, and he’d like a healer on hand. Sure enough, one man gets gored and another nearly disemboweled by the pissed-off Pumbaa; the latter, a clansman named Geordie who’s one of Dougal’s old friends, dies on the forest floor with Claire and Dougal holding his hands.

Jamie’s uncle later stops by the surgery and remarks on her poise in the face of death, then informs her she’s getting what she wished for: a trip away from Leoch. “Ye’re comin’ on the road,” Dougal says, explaining that she’ll accompany him and his men as they travel the MacKenzie lands, collecting rent and such. And as the episode closes, we see the band of travelers – oh haaaay there, Jamie – setting off for adventure.