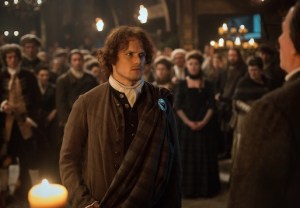 Though fans of Starz’s Outlander likely would follow the Highlander Currently Known as MacTavish just about anywhere, members of his own family have different thoughts on the matter – as we’ll see in Saturday’s episode (9/8c).

The clan drama comes to a head at The Gathering, a regular event in which all of the MacKenzie men travel to Castle Leoch to pledge loyalty to Colum as head of the clan. (Look for Outlander author Diana Gabaldon and series creator Ron Moore to make cameos as Gathering attendees.)

Though on the surface it seems like nothing more than a big party, The Gathering leaves Jamie with a serious dilemma: Swear the oath and position himself as someone with designs on his uncle Colum’s post, or refuse and appear as an ungrateful traitor?

But wait, doesn’t Colum have a son who will eventually fill his seat? Clan leadership “doesn’t go through generations,” star Sam Heughan says, helpfully enlightening those of us not well-versed in power succession in 18th-century Scotland. “If the father is the clan leader, then [his] son isn’t necessarily the clan leader. It’s more about who’s right for the job.”

RELATED Outlander Recap: An Exorcism, a Bloody Ear and an Exit Strategy

And if enough people in the clan think Jamie would make a good leader, it could cause a power shift that would leave certain factions (such as the assumed successor, Colum’s brother Dougal) out in the cold. All of a sudden, that beating Jamie took a few weeks ago while Dougal watched has a little more context, no?

“If I swear allegiance, Dougal wouldn’t let me last a minute,” Heughan previews. “So it’s kind of like [Jamie] is stuck between a rock and a hard place, and [he] deals with it in a surprising way.”

But young Fraser being threatened by his own flesh and blood isn’t his only problem during the hour. When Claire attempts to leave the castle, she accidentally winds up drawing Jamie even deeper into his fraught family situation.

Heughan says Jamie then puts on his big-boy kilt and deals with it.

“He surprised me,” the actor says of his alter ego. “He uses humor and charm to get out of it.”

So all’s verra well for the MacKenzies, then? Not quite.

Jamie’s decision “doesn’t stop Dougal distrusting him — and in fact it goes on even farther,” Heughan says, laughing.