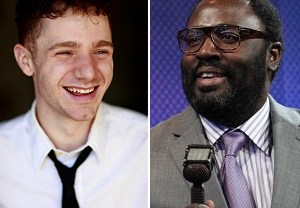 Looking has tracked down a pair of new love interests for two of its six regular characters — but which ones?

First up, Crossbones actor Chris Perfetti is set to recur on the HBO dramedy in the recurring role of Brady, an opinionated San Franciscan who writes for the weekly paper when he’s not busy managing its classifieds. He’s also set to romance a current series regular whose named I’ve been asked not to reveal.

Former Late Night With Jimmy Fallon personality Bashir Salahuddin, meanwhile, will recur as Malik, an activist-type who is working his way up in the San Francisco mayor’s office. Similar to Brady, Malik is poised to sweep one of the regulars off his/her feet.

Perfetti and Salahuddin join fellow Season 2 newbie Daniel Franzese, who will play a member of San Francisco’s nonprofit community and the new boyfriend of [spoiler].

Looking is slated to return in early 2015.