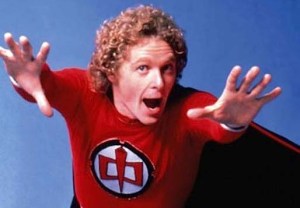 Believe it or not… The Greatest American Hero is poised to fight another day.

According to our sister site Deadline, Fox has given a put pilot order (i.e. virtually guaranteed to air) to a remake of the unlikely superhero series, which ran for three seasons on ABC in the early 1980s.

The original series, which starred William Katt, Robert Culp and Connie Sellecca, revolved around a mild-mannered teacher named Ralph who inherits from aliens a suit that affords him superhuman abilities.

Thing is, Ralph loses the instructions for the suit, making for all manner of mayhem and mishaps as he teams with FBI agent Bill Maxwell (Culp) to save the world.

Do you want to see the Greatest American Hero fly again? If so, who would you cast in the lead role? And they kinda have to keep the theme song, yes?
https://www.youtube.com/watch?v=0_ZUSQQdoS4