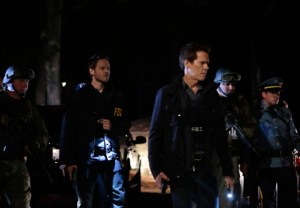 The Following is once again answering to a new leader.

Less than three months after taking over for exiting showrunner Kevin Williamson, Jennifer Johnson is also stepping down from her post at Fox’s serial-killer drama, our sister site Deadline reports.

To fill Johnson’s absence ahead of Season 3, Following writers Brett Mahoney and Alexi Hawley will now co-run the series alongside director/EP Marcos Siega.

Johnson — whose producing credits include Lost, Cold Case and Gang Related — was brought on board in June, after Williamson stepped down to focus on the upcoming CBS thriller Stalker. (Johnson is staying at Warner Bros. Television where she will focus on development, Deadline notes).

The change in showrunner won’t affect the timing of The Following‘s third season, which debuts at midseason and has yet to begin filming.

Your thoughts on the Following shake-up? Drop a line in the comments.