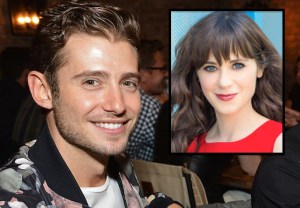 Next up on the love horizon for New Girl‘s Jess: Sleeping Beauty’s sloppy seconds.

Julian Morris, who plays Prince Phillip on Once Upon a Time, will join the Fox comedy for a multi-episode arc in Season 4, TVLine has confirmed.

Morris will play Ryan, the teacher who replaces Jess in the classroom now that she’s vice principal of her school. Ryan is “distractingly handsome” and has a confidence and swagger that irks Jess… until — per EW.com, which first reported the casting — she starts to fall for him.

Morris will debut in an episode airing in October.

In addition to OUAT, Morris has appeared on Pretty Little Liars, 24 and ER, among other series, and has a role in the Amazon pilot Hand of God.