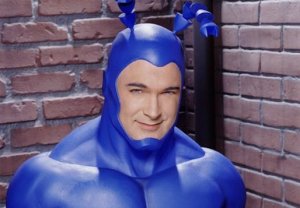 Amazon is said to be interested in reviving The Tick, the unabashedly costumed crimefighter played by Patrick Warburton (Seinfeld, Rules of Engagement), a source tells People.com.

Also starring Nestor Carbonell (Lost) as Batmanuel, Liz Vassey (All My Children) as Captain Liberty and David Burke (Brothers & Sisters) as Arthur, the live-action Tick originally ran for nine episodes on Fox in 2001.

Per People.com, Ben Edlund — author of the comic book series that birthed The Tick, and who also had a hand in the Fox series — will pen and produce the comeback, with Warburton back in the title role.

Amazon did not immediately respond to TVLine’s request for comment on the report.