Disney Channel’s Liv and Maddie is ready to twin-pique your kids’ interest with a second season of sibling revelry — and to mark the occasion, TVLine has an exclusive look at new cast photos.

In the first image, you’ve got Dove Cameron embracing… Dove Cameron, as Maddie and Liv, followed by solos of each sis (click to zoom). The cast photo then adds in Tenzing Norgay Trainor, Kali Rocha, Ben King and Joey Bragg, as the Rooneys get set to put on a show.

Speaking of putting on a show: Liv and Maddie’s Season 2 premiere, airing Sunday, Sept. 21 at 8:30/7:30c, finds the fam preparing to battle one another in the Wisconsin Cheddar-Brat Fest… which happens to fall on the same night of Liv’s Space Werewolves movie premiere. What’s a gal to do (besides “Sing it Loud!”)? 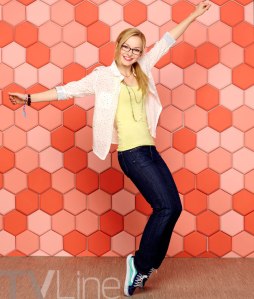