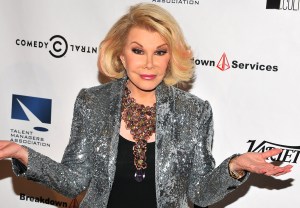 Joan Rivers was rushed to Mount Sinai Hospital in New York City after she stopped breathing during throat surgery on Thursday, according to various reports.

The 81-year-old comic legend and host of E!’s Fashion Police was reportedly undergoing surgery on her vocal chords at a clinic on the Upper East Side.

UPDATE: E! is reporting that Rivers’ condition has been upgraded from critical to stable.

Rivers’ daughter, Melissa Rivers, released the following statement Thursday night: “I want to thank everyone for the overwhelming love and support for my mother. She is resting comfortably and is with our family. We ask that you continue to keep her in your thoughts and prayers.”