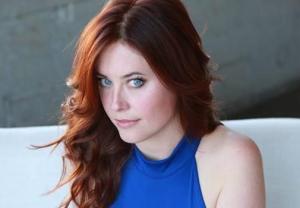 One Life to Live favorite Melissa Archer is making her next stop Salem, USA, with a shiny new gig on NBC’s Days of Our Lives — and TVLine has exclusive details on her role.

Rumblings about Archer’s move to Days first surfaced in a Daytime Confidential blind item; not long after, Soap Opera Digest confirmed the casting, then another OLTL alum-turned-Days star, Kassie DePaiva, tweeted a photo of the on-set reunion ‘tween “Blair” and “Natalie”:

But nothing else has been revealed about Archer’s role. Until now. TVLine can report that the red-headed head-turner will be playing a character named Serena, and that she (of course!) has ties to someone in Salem….

We can also share that Archer will make her Days debut on Friday, Dec. 5.

In addition to her 12-year run on ABC’s OLTL and its short-lived online revival (#Jolie4Ever), Archer’s credits include the Crystal Chappell-produced web series Beacon Hill.

Is that enough to go on, Days fans/OLTL loyalists? Any early speculation about “Serena”?