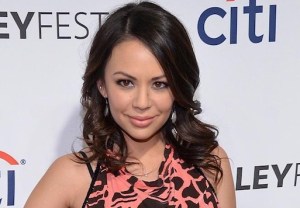 Pretty Little Liars‘ latest victim aka Janel Parish is the latest celeb rumored to be going Dancing With the Stars, E! Online reports.

RELATED Julianne Hough Returning to DWTS… As a Fourth Judge

The full (and super-official) Dancing With the Stars cast will be revealed on Good Morning America on Sept. 4.

* TBS’ Ground Floor has promoted comic Emily Heller, who makes her debut in Season 2 as a cute girl from the same small town as Jenny (played by Briga Heelan), to series regular, TVLine has learned exclusively.

* Psych creator Steve Franks and Weezer frontman Rivers Cuomo have teamed for a potential Fox comedy inspired by the musician’s life, per The Hollywood Reporter. DeTour, which has a put-pilot commitment, tells the story of a 30-something rock star who walks away from the spotlight in an effort to rediscover the parts of his life he missed while he was busy becoming a massive success.

* Netflix has acquired streaming rights for The Blacklist Season 1, which will make its debut on the site next weekend.

* Ready to get your freak on? FX has unveiled cast art for American Horror Story: Freak Show, premiering Oct. 8. (And yes, Angela Bassett’s character has three of those. Click on the image for a bigger version.)