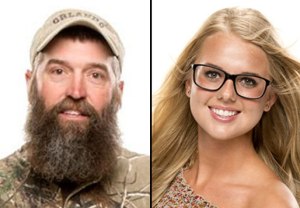 Just two weeks ago, Donny and Nicole were sitting next to each other on the block, ensuring that one of this season’s sweet-as-pie contestants would be evicted. This time around, the set-up was exactly the same — only the results were different.

But before we get into Donny’s inevitable exit, let’s revisit this rather predictable week in the BB house:

THE WEEK SO FAR | Once again, the Detonators retained full control over the game when Cody won the Head of Household and Power of Veto competitions. (He edged out Donny in a heartbreaking HoH, then had the PoV utterly handed to him by both of his nominees, Donny and Nicole. Not the underdogs’ proudest moment.) And even though Cody toyed with the idea of nominating less trustworthy allies (aka Frankie and Christine), he ultimately left Donny and Nicole at risk for eviction, with Donny paranoia at an all-time high among the Detonators. Exhibit A: This actual excerpt from an actual conversation had by Caleb, Cody and Derrick. Behold, Beast Mode Cowboy’s “insights”:

Caleb: There’s something about him. He’s smart. He’s a genius. Like, when he’s sitting there, pondering, his eyes are constantly… [moves eyes quickly back and forth] When you’re so genius and you’re so smart, you have to always be thinking while you’re not thinking. If he’s not a genius, he has a mental issue.
Cody: What the f—k does that mean?
Caleb: Have you ever seen Rain Man? You know those people.
Derrick: Could that be something from the military, though?
Caleb: It’s not gangrene. [Editor’s note: Because gangrene has literally nothing to do with mental capabilities.] He was probably intelligence. Like, when you’re special intelligence in the Army… yeah. Very few select people get those positions. I just read people very well. And I’m telling you, the guy’s a frickin’ genius. I guarantee you he’s got an IQ of probably 150-something. I guarantee it.

So, that’s what we’re dealing with this week.

THE STRATEGY | The first half of an eviction episode is always interesting. No matter how foregone a conclusion the upcoming eviction might seem, we’re always treated to a tricky little video package that gives the illusion of a different outcome. On Thursday’s episode, though, it briefly seems like Donny has a legitimate chance at staying, after Derrick, Frankie and Caleb realize Nicole is a much bigger threat to their game. Caleb offers some sage-ish advice — “We can either make a big mistake this week, or we can make a mistake that’s not going to haunt us” — while Derrick and Frankie imagine the horror of getting nominated, should Nicole stay and win the next Head of Household competition. But when the Detonators (sans Christine) take their new idea to Cody, the reigning HoH is having none of it, leaving us to wonder (for the next few minutes, at least) if Cody’s alliance members will defy him.

In the meantime, a few other highlights:

* Julie reveals that America overwhelmingly disapproved of the houseguests’ impromptu play, meaning Team America loses out on another $5,000 — and there is something oh-so-satisfying about the color draining from Frankie’s face when he hears the news.

* The houseguests are treated to short video messages from their friends and family. The most tearjerking, in order: Donny’s brother telling him the whole town of Albemarle, N.C., considers him a hero (I teared up); Cody utterly breaking down at a message from his dad (I let one single tear fall); and Derrick’s baby daughter saying — for the first time to his ears, at least — that she misses and loves her daddy (floodgates: opened).

* A long overdue segment shows Christine and Cody’s families reacting to the pair’s awkward, uncomfortable and overly affectionate friendship in the BB house. Christine’s husband keeps his cool, simply saying that “boundaries have been crossed” and that Cody and Christine should “throw some respect his way,” while Christine’s mom and dad say what we’re all thinking: “It’s not right.” Well, at least someone in the family has a conscience.

THE VOTES | For the third straight week, the evicted houseguest — in this case, Donny, by another unanimous vote — knows it’s coming. After all five voting houseguests choose to eliminate him, Donny is met with (understandably) the biggest studio audience cheer yet — and he breaks all our hearts even more by crying throughout a charming interview with Julie. He hits the nail on the head as to why he was a summer-long target — “Likability is not that good in this game.” — he admits that he’s praying to get his groundskeeping job back and, perhaps weirdest of all, he’s offered a guest-starring role on The Bold and the Beautiful. Uh, okay! Expect the unexpected, I guess!

SLIDING IN A WINTER WONDERLAND | For the first time in a few weeks, the Head of Household competition is an endurance challenge, set up in a similar style to that of seasons past: Contestants must make their way up and down a slippery lane, slowly filling the head of a snowman with water until a lump of coal can float to the top and be removed. There’s also a reward and punishment up for grabs — $5,000 in exchange for annoying shout-outs on the loudspeaker  — but in this pivotal Head of Household competition, no one seems to be tempted by it. When we last see the houseguests, Caleb and Nicole seem to be keeping a decent pace, while Victoria is, uh, just being Victoria.

Were you disappointed to see Donny evicted? And which Detonator would you like to see leave the house in next week’s double eviction — since one of them is guaranteed to be sent packing? Hit the comments!