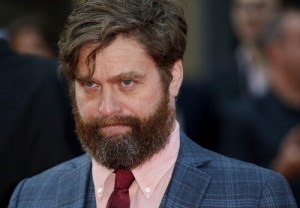 But will the entire cast be able to fit in one tiny car?

That’s one question to ask now that FX has ordered a 10-episode first season of Zach Galifianakis‘ single-camera comedy Baskets, about a man with aspirations of becoming a professional clown.

Galifianakis co-wrote the pilot and will serve as executive producer alongside Emmy winner Louis C.K. and Emmy-nominated writer/director Jonathan Krisel (Portlandia, Saturday Night Live), who will serve as Baskets‘ showrunner and also directed the pilot.

FX describes the series as follows: “In a world constrained by corporate interests and the homogenization of society, one man in Bakersfield, Calif. dares to follow his dream of becoming a professional clown. But after an unsuccessful enrollment at a prestigious clowning school in Paris, the only job he can find is with the local rodeo. Baskets follows Chip Baskets’ (Galifianakis) pursuit of his dream, against all odds, to be a respected clown.”

Production begins next year, with an eye on a 2016 premiere.

Eric Schrier, president of original programing for FX described Baskets as “absolutely brilliant” and praised Galifianakis’ portrayal of the title character as “hilarious/unique/riveting/fascinating.”

Is that enough to get you to sample Baskets? Sound off in the comments with your thoughts!