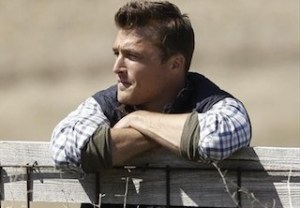 Will the farmer take a wife? (Did anyone beat me to that lede…?)

Recent Bachelorette finalist Chris Soules has been anointed ABC’s next Bachelor, for the dating series’ 19th edition (premiering in January 2015).

Having made it to the final three of Bachelorette Andi’s picks this summer, the 32-year-old, 6-foot-1, blue-eyed Soules is described as a “humble but enormously successful farmer from tiny Arlington, Iowa (pop. 427).”

That’s the sum total of what I could possibly say on the matter. Your thoughts, if any?