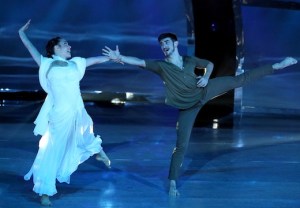 You don’t have to go to The Louvre or The Guggenheim to see incredible art — at least not from May to August. And at least not as long as Fox doesn’t enter the 2015 Emmy race for Outstanding Boneheadedness in Scheduling by pulling the plug on the life-affirming, visually thrilling and utterly sublime So You Think You Can Dance.

Among other things, tonight’s Season 11 performance finale allowed a pair of gorgeous contemporary dancers to sprout wings, take flight and possibly/maybe save some lives in the process; brought to life an intense relationship drama that will probably be optioned as a big-screen project before Labor Day by Kate Winslet; and (in the opening group routine) movingly celebrated the plight of gay and lesbian couples who paved the way for the legalization of same-sex marriage in 19 states (and counting).

Plus: ‘Da noise and ‘da funk — as Savion Glover might say — were brought by a trio of tenacious tappers.

With that massively hyperbolic wind-up, let’s get right into a discussion of tonight’s routines — then let you vote for your faves in our poll:

Dance of the Night
Ricky and All-Star Kathryn (Contemporary, Stacey Tookey)
I didn’t share Nigel’s literal “saved from suicide” interpretation of this routine, but given the subjectivity of dance, I won’t quibble with it, either. Yet whether saw a man avoid taking his own life or one who was being rescued from addiction or anxiety or a place of utter isolation, what’s inarguable was the insane quality of Ricky’s movement. From his backwards crawl-slide (I’m sure that’s a technical term) to the way he and Kathryn both seemed to take flight on their leaps, I found utterly swept up in the steps, verging on tears. Watching Ricky step into the light and get his “wings” — and then develop a mean case of the ugly-cry lip-quivers during judging reinforced the opinion I formed right from his audition: Ricky is our Season 11 champ.

Dance of the Night (Co-Runner-Up)
Jessica and Ricky (Jazz, Ray Leeper)
There was such brute strength and smoldering tension in this routine that I found myself scribbling down the term “sexual robotics” in my notes. The demanding choreography, the stark costuming and the soaring voice of Mary J. Blige all conspired to make this routine a standout, but I didn’t put down my credit card and yell “Sold!” until Jessica and Ricky brought it to life with flawless synchronization and a bit of wicked inner glee. In a season where sexy has been in short-ish supply, this one definitely didn’t disappoint.

Dance of the Night (Co-Runner-Up)
Jessica and All-Star Robert (Contemporary, Travis Wall)
The near violence of this dance about a woman realizing her partner won’t really miss her when she’s gone — apologies if that gets “Cups” stuck in your head — was jarring, but at the same time completely effective. I loved that Travis’ routine stamped out any hint of smiling pageant girl in Jessica’s demeanor — allowing her to explore darker themes in a believable way. Better still, as Nigel pointed out, was the way Jessica subtly shifted from desperate to disgusted following Robert’s choke-hold move. Her final move of discarding the ne’er-do-well lover was like a twist of lemon — stingingly bitter, overpowering and delish.

Most Forgettable
Jessica and Zack (Broadway, Spencer Liff)
Dear SYTYCD, Can you please widen your repertoire of Broadway choreographers beyond Spencer, who seems incapable of tapping into a deep emotion or pushing the boundaries of his genre? That said, while Jessica’s opening “Angelina leg” was a thrill, she never quite matched the sensuality of her Jessica Rabbit gown. And Zack, for his part, faded into the background a bit — except for that pirouette-drop-leap and the wrap-around lift he executed on the stairs.

Second Most Forgettable
Jessica and Valerie (Bollywood, Nakul Dev Mahajan)
Yeah, it was pretty — but the gals’ hand gestures often struck me as too flail-y, and it wound up feeling like a routine with which Jessica and Valerie were trying to survive, rather than transcend.

Biggest Gap in Execution
Valerie and Ricky (African Jazz, Sean Cheesman)
The judges were all “Gush, positive, luvvv, yay!” But surely they noticed how Ricky punctuated every move and extended every reach twice as far as his partner, no? Which isn’t to say Valerie’s not very good, it’s just that Ricky is, well, grrreat.

Most Unexpectedly Moving
Zack and All-Star Aaron (Tap, Anthony Morigerto)
A bartender and patron connect via tap dance to the strains of Billy Joel’s “Piano Man”? Srsly? But what looked on paper to be cheesier than a package of Kraft singles turned out to be a sweet, meditative conversation — told entirely in scuffed and stomped rhythms — that proved Zach’s emotional versatility and Aaron’s ridiculous personal magnetism. (Why hasn’t Fox signed that cat and Jasmine Harper for a rom-com pilot yet? #fromtheofficeofgreatideas!)

Best Acting
Valerie and Zack (Contemporary, Tyce Diorio)
If Valerie hadn’t taken the stage using a cane, I might’ve debated whether her character was supposed to be blind or a marionette. Still, the joy of her and Zack’s romantic awakening, the way their bodies reacted to each other through touch instead of sight, brought great beauty to the sometimes stilted movements of this tricky routine.

Most Surprising
Ricky and Zack (Hip Hop, Pharside and Phoenix)
Holy hell, the final two guys got down and drrrty (three Rs, hold the I) in this entertaining card fight between the King of Diamonds and the King of Spades. Pharside and Phoenix put the fellas through so many grueling moves — especially that moment of Zack drawing up Ricky to stand on his stomach, and of Ricky bobbing Zack’s head into his groin — that I came thisclose to naming it Dance of the Night. Unfortunately, though, both contestants’ isolations and hand work struck me as a half-step too sloppy, leaving it with my own personal ranking at No. 4 for the night.

Routine I’m Still Not Certain About
Valerie and All-Star Aaron (Tap, Anthony Morigerto)
Can we pause to swoon over Aaron in a brown suit and hat? [Siiiiigggghhhhhhhhhhhhhh.] But while Valerie proved an cute old-timey love interest, stomping her feet and giving Aaron the business, I’m not sure her quality of movement was enough to earn her the Season 11 crown or that she really brought me into the world she was supposed to be creating. Or maybe I was too busy paying attention to Aaron (aka one of the most charismatic fellas ever to grace the SYTYCD stage.) In the end, sometimes nice girls finish fourth, and there are certainly worse fates that that, yes?

What did you think of the SYTYCD performance finale? Which were your favorite routines? Who deserves to win? Take our polls below, then sound off in the comments!