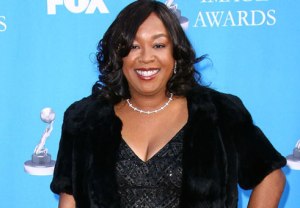 The Mindy Project is taking a trip to Shondaland.

TVLine has learned exclusively that the A-list creator of Grey’s Anatomy and Scandal is set to make her acting debut in a fall episode of the Fox comedy.

I’m told Rhimes, a self-proclaimed super-fan of both The Mindy Project and its star Mindy Kaling, will play herself on the show. Specifics about her storyline are being kept under wraps.

Shh. Nobody tell @mindykaling that I can neither act nor appear lifelike on camera. NO ONE STOP THIS FROM HAPPENING! #dreamsDOcometrue

Rhimes’ episode is slated to shoot in early September and air later this fall.