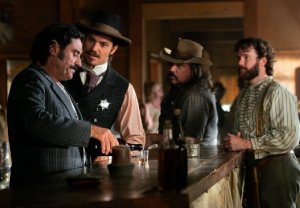 Well, for [bleep]’s sake: Deadwood may have a pulse.

On the Emmy red carpet Monday, Kim Dickens — who played madam Joanie Stubbs on HBO’s late, beloved western — admitted to me that the entire cast remains “heartbroken” about the show’s premature demise.

But you’ll probably be more interested in what she said after that with regard to a closure-filled Deadwood revival. It involves a conversation she had with series creator David Milch, and includes the words “hope” and “possibility.”

Push PLAY below and then hit the comments with an answer to your question: Do you believe strongly that HBO (which has a sterling record when it comes to giving its shows proper goodbyes) need to right this wrong?